Ecological Form: System and Aesthetics in the Age of Empire 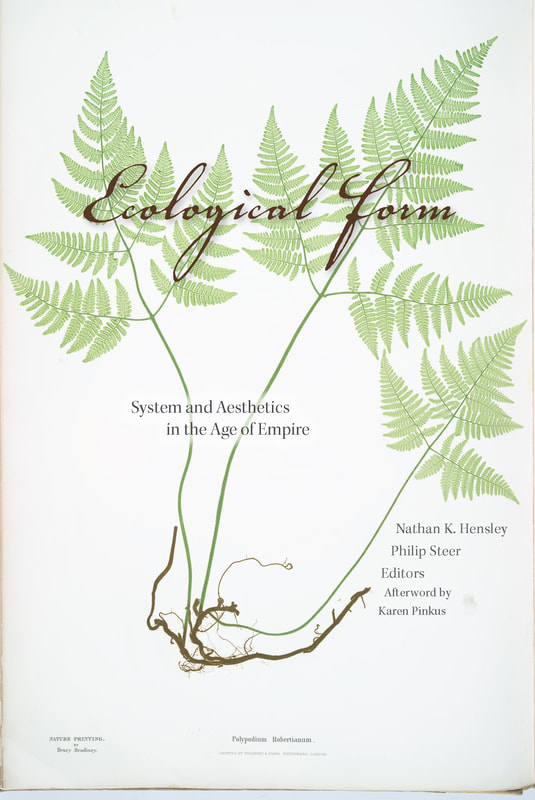 With Philip Steer (Massey University, NZ), I co-edited a collection of essays that links human and natural scales of disaster in the nineteenth century and after. Published by Fordham UP in December 2018 (copyright 2019), Ecological Form features original essays by Sukanya Banerjee, Jesse Oak Taylor, Elizabeth Carolyn Miller, Deanna K. Kreisel, Adam Grener, Benjamin Morgan, Lynn Voskuil, Monique Allewaert, and Teresa Shewry—and includes an afterword by Karen Pinkus. Together we argue that Victorian thinking about empire and ecology can help us understand the often violent processes by which human beings were, and continue to be, incorporated into massive systems seemingly beyond their direct control. As Philip and I write in the Introduction:

Victorian England was both the world’s first industrial society and its most powerful global empire: the nineteenth century therefore stands as the origin of not just the irreversible ecological degradation we have inherited from our nineteenth century forebears, but also the global interconnection and vast asymmetries of power that are the legacies of the British Empire in the present. Given that the Victorian Empire’s world-spanning configuration was the first political project in history to be powered almost exclusively by fossilized plant life, it follows that the carbon-saturated atmosphere we breathe today is, in both metaphorical and brutely chemical senses, the atmosphere of the British Empire. (2-3)

The book is available for sale at the Fordham site and other retailers. If you're interested in teaching the book —which we very much recommend!—please drop me an email: depending on schedules, the editors and / or specific contributors would be happy to Zoom into your class to talk about the book, and I'd be very glad to set that up.
The Table of Contents is here:

Part I Method
1. Drama, Ecology, and the Ground of Empire: The Play of Indigo
Sukanya Banerjee, 21
2. Mourning Species: In Memoriam in an Age of Extinction
Jesse Oak Taylor, 42
3. Signatures of the Carboniferous: The Literary Forms of Coal
Nathan K. Hensley and Philip Steer, 63

Part II Form
4. Fixed Capital and the Flow: Water Power, Steam Power, and The Mill on the Floss
Elizabeth Carolyn Miller, 85
5. “Form Against Force”: Sustainability and Organicism in the Work of John Ruskin
Deanna K. Kreisel, 101
6. Mapping the “Invisible Region, Far Away” in Dombey and Son
Adam Grener, 121

Afterword: They Would Have Ended by Burning Their Own Globe
Karen Pinkus, 241
​
Acknowledgments 249
List of Contributors 251
Index 253